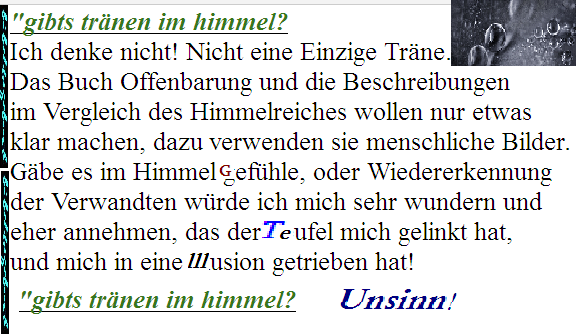 I think not! Not a single one tear.
The book of Revelation and the descriptions
compared the kingdom of heaven want something
make clear to use human images.
If there were in the sky Emotion, or recognition
the relatives I would be very surprised and
rather assume that the devil has linked me

and me in a III has driven usion!

"Ready to meet God face to face" is the subtitle of Rick Howard and Jamie Lash's book "This was your Life!" This book should have are not just once a bookcase. Anyone who has read it will want that other read it. "This was your Life!" is absolutely captivating. A book that I consider as a basis for discipleship classes, home groups and as a gift for Frischbekehrte and "old hands" for eminently suitable. It is a reality, something inevitable that every Christian, one day before the judgment seat of Christ for what he has done has or has failed to answer. Our works will be tested. What was built of wood, hay or straw will burn what is built of gold, precious stones and silver, will remain. A truth that challenges and our behavior, our motivation to do things or not do and change the way we deal with ourselves and others can. "

Book Notes
# The world we know, Terrestrial, has with hers has no access to the actual, the real world!
We have the same terms. But the content is not there. That
is hard to admit, because the terms with human content
are filled.
# Now. Anyone who wants to prove that there is another,
Are "real" world? Just because we necessarily a wish so much,
it does not indicate this.

Our world Illusionieren as in Buddhism does nothing. We feel have
Suffering, ect. It is real, at least for ourselves!
# The seriousness with which one attends his own life.
A small "Bauchpinselung" and you sell your life
for a Lien Passenger layer!
# What is the goal?
It apparently does not seem possible to those moments or high hold times, where
one has touched the lives of even real!
It is easier to use anything else that might produce similar, but is
but then disappointed again and again!
An 8-year Girl has a stage curtain for Pupentheater play hung on the door to audition something the next day. On the clock is 15:30 clock! Although parents find it important that the child gets along with other children, and meetings provide the child vegisst not his plan. And when it undergoes the time, it wants to go home, from the most beautiful play with other children, away to just audition parents something.
In the world of the child, this is very important! How important is the parents, the child's world?
# Events
~ Who's going somewhere, because something is organized, is often in search of contact! At least his solitude drives him! ~ Why do they go to church?
Is it their home, they want to convey to others a short home?
And they are forgetting that God (so they have it gelaubt at least so far) wants to convey a real home by Jesus and they still 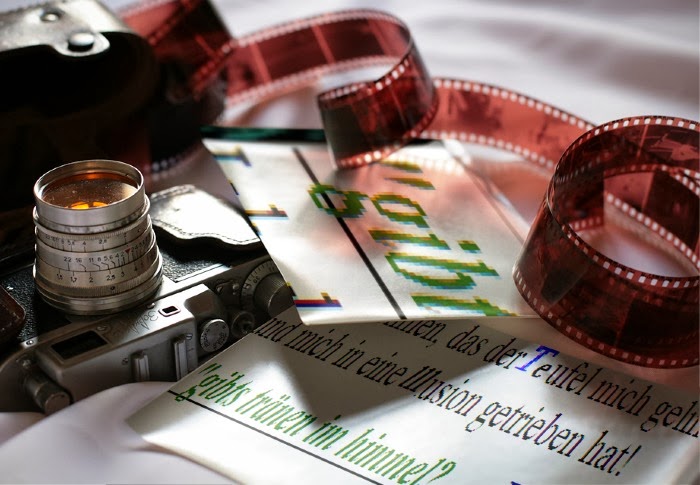 are even on the way there?
And why do they give themselves over satisfied with the story? And tell yourself and others
it?
The misery of our existence lies in the grace of God! The glory too!
But now hatt us anything anesthetized, so that redemption only
a sense, is a worship, a Bible reading, a little spiritual, a statement
a good sermon, a great preacher, a good meal, a gefallendes me to life

. Eric Clapton wrote a song after his 5 year old son rushed out of the 53 floor to his death.

From their own perspective of the sky is not understood. And it is his own

Are tears in heaven? If I met you, there in the sky, far away from here? Would you recognize me, call by name, and today? here? Will I be strong, go any further? Recognize your truth? your world is heaven. but my is here! Still I find my own way through day and night, through so-called joys and sorrows, I find him here, the sky is still far for me. Mighty is the time can pull down the time, it can paralyze, can break hearts the time that you ask only begs and screams. But the door, I know you're the place that is called heaven in you, there is peace, where they know no tears. Will we meet there in heaven there with you? you'll recognize me, call by name, If I you here, Jesus Christ ' ?