Because a redeemed man, is finally redeemed by grace or a Lemming

Rush .... deliberately to his death? Or ceasing to fight against God 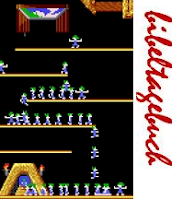 On the rumor that lemmings select the suicide, nothing truth to it. Lemmings are looking at overpopulation for populating a new field. For this purpose they go in groups of wandering.
In these walks, which are usually very long and effort, it comes to the death of many animals. Christians also believe again that they need to give their old life to death. However they run it from Jesus Christ, the crucified the glory! Very often Christians try to produce the faith itself. Or to produce prayers. Or to produce worship.

Grace means that God shows you that you can not do anything. Not even awarded

Grace is given by the God who alone decides when you need grace. Otherwise it would be a user God.
You would get grace / inducements at its will, how could we
Trust God that He gives us when it also helps us to heal? We would
not boast of God, but our prayer works, or our faith works.
"... it is the gift of God: Not of works, that no one can boast to be "
8  For by grace you have been saved through faith, not by my own strength - God gave it -
9  not, so no one can boast result of works.
10 His creatures we are, created in Christ Jesus to do good works in our lives that God has prepared for us in advance.

But let him ask in faith, with no doubting, for the one who doubts is like the wave of the sea driven and tossed by the wind.

God is not fair by human standards! People suffer. People are inaccessible! And yet God is always love! He wants something better for you than fast justice or fairness.

lemmings did not fall to her death. They are simply weaker and are then prey, after the long hike!
Christians, however, if they do not cease to fight against God, and to find their own way of salvation through their own works

Them-Tarne quiet christian, you know, that there are thy works, and not bestowed the Cross of Christ-you know, because there is no peace and security-
will learn there is no bridge that leads to grace. mercy is His self-determination.
<< Romans 9:15 >>

That sounds like shit. I know! And I would have previously dismissed as heresy!
But in reality it is wonderful! Why?
Because a redeemed man, is finally redeemed by grace. Probably not, not because he has the right theology.
But simply because HE wants!
And this in turn shows ER in Jesus Christ and Him crucified. He took all the sins to the cross and
the guilt of all, the penalty was on HIM!
Do not be a lemming! And stop fighting against God!


"Why are purple cows" and "A Fish Called chopsticks"

How to stay under the umbrella of the Most High?

How do you stay in Christ?